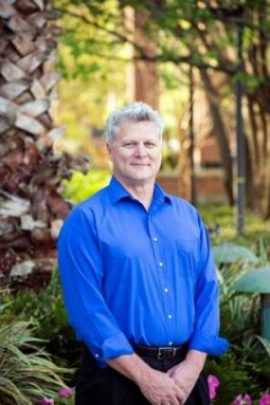 He played Superman in the movies, but after a fall from a horse left Christopher Reeve unable to walk or even breathe on his own, he became a real-life superhero as an activist. Reeve passionately lobbied for research to help those with spinal cord injuries. Once, at a meeting with a group of neuroscientists, he shared one of his greatest fears: that the power on his portable ventilator would go out.

One of those neuroscientists was Gordon S. Mitchell, Ph.D. Mitchell, who had dedicated his career to discovering new therapies that could put such fears to rest, found Reeve’s words inspiring.

“In spinal cord injury, the most common cause of death is respiratory failure,” Mitchell said.

Now, Mitchell, the founding director of the Center for Respiratory Research and Rehabilitation and a professor in the PHHP department of physical therapy, is making great strides toward changing that.

Mitchell and his research collaborators have shown that the ability to breathe on one’s own after a spinal cord injury can be improved by manipulating a patient’s oxygen levels; for example, lowering oxygen levels repeatedly for brief intervals. These repeated episodes of low oxygen trigger plasticity in motor nerve cells, or motor neurons, that activate the diaphragm, causing stronger diaphragm contractions.

“Really, a breath is not about the lungs,” Mitchell said. “It is the brain and spinal cord and muscles — it’s a pumping action, a movement. Just as failure to make that movement is the most common cause of death in spinal injury, the same is true for most neurodegenerative diseases. People seldom think about breathing because it’s so automatic.”

Mitchell first became interested in breathing as an undergraduate student at the University of California, Irvine, where he happened upon a comparative respiratory physiology lab while following an early interest in marine biology. Along the way, he discovered a passion for human respiratory physiology. He joined the faculty at the University of Wisconsin-Madison, where he carried out his research for 34 years before joining UF two years ago under the university’s preeminence initiative.

One surprise discovery from Mitchell’s research is that the concepts extend beyond breathing to other movements, including walking or lifting. His studies have demonstrated an increase in leg strength and substantial improvement in walking ability in patients with spinal injuries who have no prognosis for functional gains.

Mitchell’s work extends from basic research concerning molecules to rodent models of disease to collaborations with clinical investigators as they attempt to translate their findings to humans.

In human studies being carried out at UF and partner institutions Emory University and the Rehabilitation Institute of Chicago, participants sit in reclining chairs wearing masks that deliver a lower amount of oxygen than contained in room air. The treatment is easily tolerated.

“When you’re breathing on your own with mild reductions in oxygen, you can barely feel it,” Mitchell said.

The key to the therapy’s success, which is termed “intermittent hypoxia,” is delivering low oxygen for short, regular intervals. Intermittent hypoxia works because it prompts the body to adapt to repeated changes in oxygen levels, Mitchell says. This adaptation strengthens the nerves involved with breathing and walking.

Now, Mitchell’s team is focused on researching safety and benefits over time.

“My goal is to improve the ability to move,” he said, “whether it’s walking or the life-sustaining ability to breathe.”